Male Allies for Women Leaders: Why They Matter

Authored by Orange Grove Consulting and the Brandon Hall Group

In a 2019 survey, Brandon Hall Group and Orange Grove Consulting jointly examined the topic of male allyship, defined as men supporting women’s careers in the workplace. In this white paper, we reveal the complications to addressing gender imbalances, research findings that point to male allies as critical components to women gaining traction in leadership, and more. Read White Paper The Incredibles: Leading the Way to Having It All 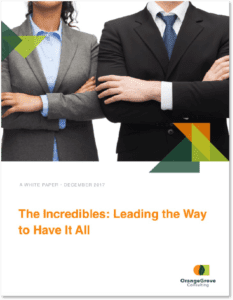 In this white paper, we’ll introduce you to three real life Jane and Teds, lawyers who have sought to minimize what can feel like the “win-lose” equation of success at work and success in creating time for life.  Instead of capitulating to the either/or choice of demanding work or an alternative career to make time for family, these three lawyers took the more challenging path of holding on to both their career and life goals while moving ahead to become equity partners. We’ll show you how this choice led to the development of 21st century leadership skills, skills that enables them to meet both their personal and professional objectives. Read Whitepaper

Overcoming Unseen Obstacles: How to Get More Women Into Leadership Positions

In this white paper, you will learn the most common outdated approaches to women’s leadership that are blocking change, an updated approach to helping progress women through leadership in 9 steps and a scale on which you can measure how likely your company is implementing lasting change. Read Whitepaper

Do you want more women in your leadership pipeline? Do you want to leverage your full talent potential? Here, we offer alternative strategies and behaviors to help you implement a lasting improvement towards gender parity.  The structure of the e-book is as follows: Each myth is described. Then, we’ve reframed it using a different perspective. As a bonus, we share some activities you can try in order to put the reframe into action. Read E-Book

Managing Women and their Own Unconscious Bias

Gender bias is culturally entrenched, and, in most cases, unconscious. As diversity expert, Howard J. Ross, explains, “ Virtually every one of us is biased towards something, somebody, or some group.”1 But not all bias is external: Women stereotype themselves, too. Women think they are better multitaskers, better nurturers, and generally not as tough as men. They feel guilty when they are at work instead of being with their kids or “giving back.” In a phenomenon known as “The Tiara Syndrome,” women wait to get picked for promotions or raises. They internalize cultural rules about femininity, and allow this to guide their behaviors, whether or not those assumptions and biases are even valid.  Read White Paper