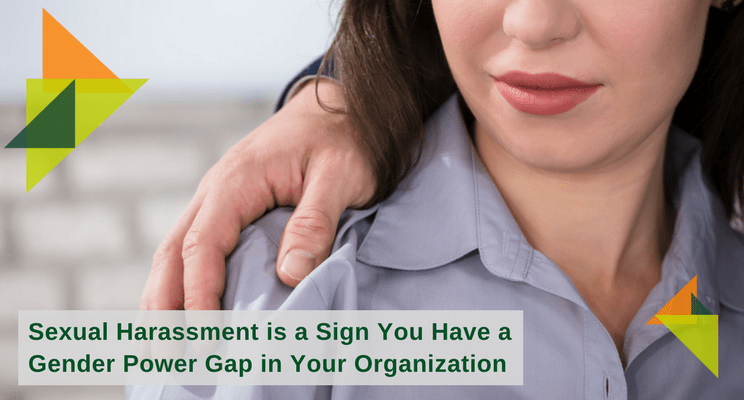 By now, you can’t have missed the growing swell of #me too revelations that many, if not most women have experienced. Women are collectively sharing some degree of harassment in the workplace because of their gender.  Whether it be “micro-aggressions” – jokes, hints, or jabs intended to make women uncomfortable (to keep them in their place) – or outright unwanted advances, it seems that what women have hesitated to admit for generations is suddenly front page headlines. Women are racing to share their story.

While victims coming forward en mass may be new, what the #metoo movement has awakened is our awareness that these things have been going on behind the scenes for a very long time.  Nearly every woman we have spoken to since the Weinstein case exploded has shared a story of how they too have at some point been marginalized in the workplace for their gender.  One woman spoke of how she would be cat-called as she walked between rows of cubicles so she avoided restroom breaks or going to the coffee room.  Another mentioned a colleague grabbed her at a business dinner and asked her to go to his hotel room.  When she rebuffed his advances, he told her she had been sending him “signals” for years.  A third told me she endured years of sexist and sexual jokes told in her presence at work.  If she did anything other than laugh nervously, she was told she didn’t have a sense of humor.  I’ve endured past experience of the stress of having to continue to maintain customer service professionalism when a male client used the situation to flirt and make unwanted sexual “small talk.”

Since Weinstein, we’ve also heard men respond.  Many wonder how they unwittingly may have been complicit or perpetuated the problem. Did telling a woman she looks nice cross a line?  Did watching other men harass a woman without intervening make the situation worse?  Can you even be alone with a woman at work without things getting misinterpreted?

We need male allies and the growing #HowIWillChange response is helping.  And while we applaud men for their introspection, the problem is much deeper because at its root, the behavior is about power.

Men who catcall or make jokes at others’ expense do it to make themselves feel powerful.  It is a sign of insecurity– that is, it’s a way to exclude those that are different.  Men who assume every interaction with a woman is sexual in nature, tend not to have healthy egalitarian relationships in their life. They tend to come from a patriarchal household, work in male-dominated environments – where women hold administrative and pink-collar jobs and don’t control the resources. They spend their social time surrounded by men.

We also spend a lot of time inspecting the victim – did she “send signals”, dress inappropriately, fail to draw boundaries. Did we fail to “train” the men such as “avoid meeting with woman over dinner or avoid using overtly sexist language”? Even then, we’re not addressing the real issue – that some men are using these trained skills to gain and perpetuate their power at the expense of the women (and minorities) they feel threatened by.  And, in organizations with few women (and minorities) it works really well.

So, what can sexual micro-aggression and harassment tell you about your work culture?  It is a symptom of a gender power differential.  And the good news is, you can fix it.

When there isn’t a balance of women across the organization, throughout the levels and departments, you run the risk of harboring and facilitating harassment.  It isn’t just about hiring and promoting more women (because they WILL leave if harassed enough), it is about recognizing, and NOT hiring and promoting men who use harassment to build their power.  It is about changing the response to harassment from victim shame and secrecy to understanding how the organization’s culture contributed to the situation.  And it is about eliminating obvious opportunities for the power imbalance to be magnified or abused.  Having work events at bars late at night so the macho males can show how much they can drink or sporting events where they can exhibit their athletic prowess can exacerbate the power differential.  As women try to keep up or avoid these events, they are vulnerable to harassment and abuse.

Thinking inclusively is more than just recruiting, it is about how you do business throughout the organization.

Want to help make your culture more inclusive? We can conduct an audit of your organization’s gender parity, illuminating opportunities and inadvertent barriers to women’s advancement as well as areas of high risk for harassment.  We can also train men and women to reframe their assumptions about power and each other.  We can help you build a strong foundation for gender parity in your organization, so that everyone thrives. Contact Us to learn more.